LJ is going to be playing around with the default site scheme soonish. After the code push, the default for new users and for looking at the site when not logged in will be the new thing. It'll go site-wide as the default in a couple weeks. Since the code is stupid, it can't tell the difference between "I like XColibur" and "I haven't picked a site scheme, so I'm just seeing the default." This means if you're viewing the site in XColibur now, you're suddenly going to go from seeing LJ like this: 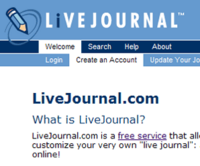 If you like the new one better, great. If you don't, starting tomorrow after the code push where LJ will remember the difference between "I like XColibur" and "I don't care what bloody site scheme I see", visit the Browse Preferences page and explicitly pick the site scheme you want.

Still no response from the BOfD, except for the "Hey, you e-mailed. How did your thing go?" survey. I let them know, all right. There was a shiny little link for unresolved issues, and I followed it. My summary of the problem: My system was absent from me for one month for repair under warranty. During that time, I had to initiate any inquiry about the status of my repair, and I was never given a satisfactory answer. The system was returned to me with a smaller hard drive than the one that failed. The error was corrected in a timely fashion, but I request compensation for the unacceptable customer service during the initial month.

Dell fails at customer service. I should really check my battery, too.

Genderpondering from the Strypey One. Very well-disclaimed, intended for gathering of insights on commonly-perceived gender stereotypes rather than blasting people apart for accidentally tripping over a gender stereotype.

Diane Duane fans: Door into Shadow manuscript on eBay: http://cgi.ebay.com/ws/eBayISAPI.dll?ViewItem&item=120021469694
The roomie has been admonishing me (alternately) to remember to breathe, and to get a bucket for that drool.

There were no pancake crickets this week (unlike last week).

At work, have had two meetings with Web Guy, one Tuesday and one Wednesday. Both went well. Am winning at getting people to do things to help what I am doing. Web Guy says he has been seeing my name all over stuff, I am to assume recently. Management was incessantly on the phone, so we could not meet with her.

I was supposed to be in bed at eleven. I got there by midnight. At one, I realized I was not getting sleep any time soon. Therefore, I got up and turned on the computer. I will be at work by one, so I should probably start with the sleep now-ish.

Weekend plans: I should e-mail the Darkside when I wake, 'cause he has first refusal on my weekends when they're free. I didn't see him last Sunday, so he might have nefarious plans for me this Sunday. Failing that, there is Other Stuff!

Must charge camera, and start with the uploading pics now that there is My Computer Behaving Herself.