For anyone Googling who wanted to know about their 2005 Dodge Neon's goddamn battery...

If you come across this on Google later, I'm assuming you have a 2005 Dodge Neon sedan (or similar) and you are trying to remove the battery, perhaps to replace it. This was my experience, but if you don't know what you're doing, please get professional help if you can, and if you think anything is unsafe, don't do it. General electricity safety involves not allowing the possibility for a shock to cross your heart, so I was doing all of this one hand at a time.

You have disconnected the battery leads (negative first), including the rather large plate with the jagged teeth that secures the positive terminal. You have carefully stuffed a rag between the negative terminal and anything that might contact it. You have tugged the handle.

And the fucker won't budge, will it.

Behind the battery, as you stand in front of the car, take your flashlight and look: there's going to be a hexagonal bolt in the middle of a little metal plate. That bolt must be loosened to allow the plate to move, as that plate clamps the battery. The socket that fortunately fit the bleeding bolt in my car was 1/2".

There is just about enough space to access the bolt with a ratchet if you slide it in from the left, although if you have a ratchet that will allow you to turn it directly down, I envy you deeply at this point. 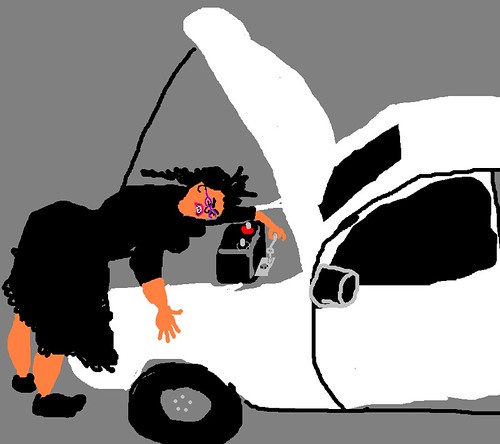 Loosen the bolt until the plate can move a little, freeing your battery.

Haul the battery out, after removing the jagged-toothed plate from the positive terminal yet again, the sly fucker.